A poem about immigration, based on a guy I used to have to listen to when I worked in a clothes shop. The poem owes a lot to a book by economist Philippe Legrain called Immigrants: Your Country Needs Them: http://www.philippelegrain.com/immigr…. It’s a good book, I wish we had it on the school curriculum. 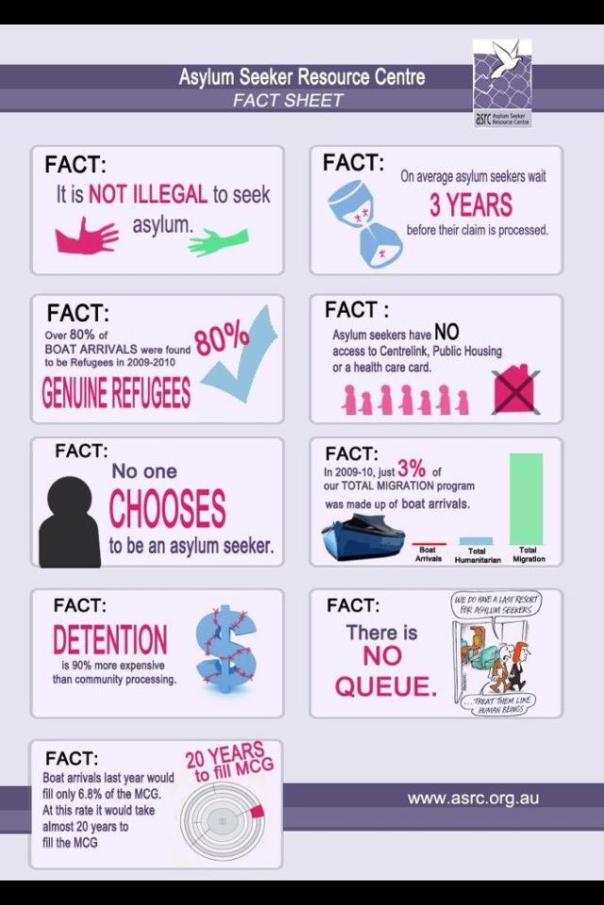 The Universal Declaration of Human Rights, The Refugee Convention and the Convention on the Rights of the Child have all been created to protect the rights and freedoms of every single human being equally.

This discussion acknowledges that there a broad range of issues within our community that cannot be compromised or ignored.  However the rights of asylum seekers and refugees cannot be held in competition with these other important issues.  As Australians we have an obligation to participate and influence the decisions of our leaders, but perhaps more importantly we have an even higher obligation as human beings to one another.

To take the first class of Lessons Overboard head over to the online classroom at www.lessonsoverboard.com 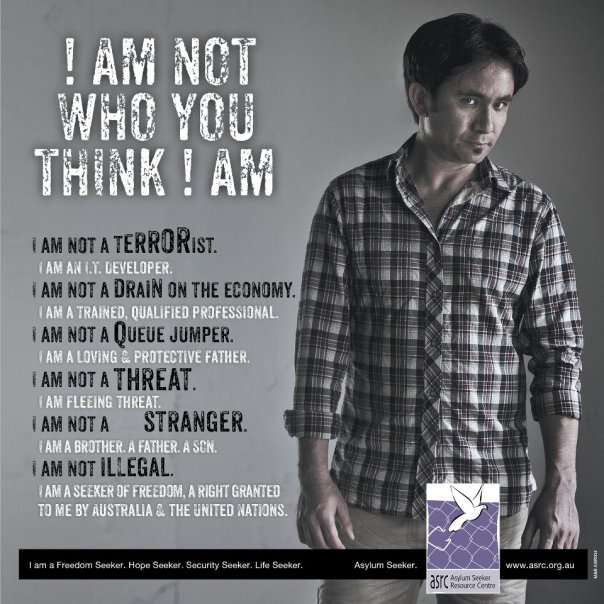 The Truth on #AsylumSeeker Numbers!

On Friday night  Australian’s were unwinding from the week that was, settling into the AFL & NRL finals, catching a game from the Rugby World Cup, enjoying a concert, a meal with the family or a night out with friends. Some were still working as the weekend drew near, Hospitals never stop, trains keep on running and night shifts about to start. In Canberra they were working too, the Minister for Immigration and his Department used the night to release their controversial changes to the Migration Act.

Maybe it wasn’t a cynical move, simply an act of a Department and Minister under pressure and burning the mid night oil to have it ready for the weekend press and the monday morning sell. But most, rightly in my view, saw it as a cynical attempt to slip it in under the radar. It’s no secret that the Government, despite being stopped by the High Court, are desperate to restart their “Malaysian Solution”. So while the amendments make no mention of Malaysia, they would allow the Minister to pick and choose the offshore processing destination of his choice. One of the more disturbing aspects of the amendments is that which would allow the Minister alone to choose a country for offshore processing even if that Nation’s domestic and International law protections for Asylum Seekers are zero.

Minister Bowen must be taught the Anthem's 2nd Verse!

So what does all this have to do with our National anthem, Advance Australia Fair? We all grew up singing it at school, we listen to it belted out at sporting events and we expect new citizens to know the words. But most of us have rarely heard the second verse and clearly the current crop of Australian politicians aren’t aware of the lyrics. “Toil” makes a return, while “Girt” doesn’t get another crack but the end of the verse solves once and for all the true National position on Asylum Seekers.

“For those who’ve come across the seas. We’ve boundless plains to share”

That’s right, the Australian national anthem singles out in particular those who come across the sea that we here in Oz have a huge country to share with them. It doesn’t say you have to come by plane (because you don’t) and it makes clear it is us, not Malaysia, Nauru or PNG that will be sharing our land.  And if somehow predicting the current debate the next two lines give us the guidance for this struggle.

“With courage let us all combine. To Advance Australia Fair.”

Yes indeed, with courage let us one and all unite, new Australian’s and old, so that we can share a future that is better than our past, together! Perhaps those of us advocating for onshore processing have been doing it all wrong. First we pointed to Australian law and appealed to the “fair go” attitude. Then we reminded our Government that if they wished to ignore or change our laws there was still International law that they couldn’t circumvent. When that failed a brilliant group of lawyers took the case to the highest court in the land and won! Again it appears even the High Court cannot persuade this Government or those in opposition that offshore processing is wrong.

But the answer was there all along, it was in one of the first things they taught us at school. So important it was deemed that we had to stand in sun, wind, rain and snow to belt it out or fear the wrath of the principal’s scorn. So we must stand tall once more, sing it like we care and make the new Immigration policy, Advance Australia Fair!

ALP MPs must cross the floor on Asylum Seekers!

Walk the Walk if you want to Talk the Talk.

A politician’s job can be a complex thing, who really wants to speak out of both sides of your mouth to keep your job? But what really counts is the way they vote on the Parliament floor.

The Asylum Seeker debate is still going strong in Australia. It is an issue we’ve grappled with as a nation since white man arrived. But it is relatively easy to argue that 200 years on our politician’s are handling the matter more disgracefully than at any other time in our history. At times in the past public opinion was in favour of harsh treatment of those seeking asylum on our shores. Public opinion also once supported the fact that Saddam Hussein’s Iraq had WMD’s, something that even Dick Cheney admits was wrong. But for what it’s worth public opinion does support the onshore processing of asylum seekers, 53%. But then you have the other swaying factors to process onshore, legal, economic, humane, health and just the down right decency of doing the right thing.

For the ALP this is a tricky issue only because they made it that way. Under John Howard the ALP took damage at the polls for supporting onshore processing, the Tampa and children overboard had major impacts on their electoral success or lack thereof. So it seems strange that a party who took a massive hit on an issue would turn around and jump to the other side of the fence to be hit again. Either they believe it will give them electoral success (it wont) or they believe they are doing this in the National interest (it isn’t). On the first issue polls quite clearly show this is a Government in trouble and the “Malaysian Solution” is on the nose. In terms of a National interest how is something that costs more, is illegal under International law and Australian law (hello High Court), costs a fortune and is downright inhumane considered the best thing to do?

It isn’t and they know it, so the Labor left faction has been rolled out to show us the party still has a heart. Doug Cameron has  taken to the airwaves and caucus to appeal for onshore processing, Steve Georganas has hosted Welcome2Australia at Parliament House and others have reminded us that “we have to remember these are human beings”. We have to remember? Us? No,we know perfectly well who they are and we also know why you were elected. Not on a platform of offshore processing and a plan that makes the brutal Pacific Solution and TPV’s look down right pleasant.

Government MPs and Senators don’t get to tell us about humanity, International law and what is in the National interest unless they do the one thing they were sent to Canberra to do. Vote! If they honestly believe in International law, fair and just treatment of Asylum Seekers and actually welcoming people to Australia then they will cross the floor and vote against any and all offshore processing legislation. The very poorly named “Malaysian Solution” is no solution at all. Tony Abbott’s Lib/Nat coalition doesn’t have an acceptable policy either so any gloating on his behalf is for political chest beating only. But the ALP is the Government of the day and the responsibility rests with those ALP members who do believe what the majority of Australian’s believe and voted for them to deliver.

The only thing that counts is their vote on the floor of the parliament. If they want to talk the human rights talk, they have to walk the political walk. And cross the floor!

DIAC SECRETARY MUST SPEAK UP ON ‘SOCIAL UNREST’ CLAIMS