A FEDERAL government program that stopped welfare payments to Aboriginal  parents whose children missed too much school has failed to produce sustained  improvement in school attendance.

An official evaluation of the trial’s first year shows it did not improve the  attendance rate, and had little effect on lifting enrolments.

Between the program’s inception in January 2009 and August this year, 380  people had welfare payments, such as the Newstart allowance or disability  pension, suspended for an average of 21 days, and one had them cancelled for  failure either to enrol their children or to ensure regular attendance.

The program ”did not demonstrably improve the rate of attendance … overall,  nor was any effect apparent at any stage of the attendance process in 2009,”  the evaluation says. Even after the program was tweaked in the second year and  produced a spike in attendance,  the improvement was not sustained.

The  School Enrolment and Attendance through Welfare Reform Measure (SEAM),  was trialled in six Aboriginal communities in the Northern Territory. The  federal government has a bill pending to introduce a third version  in mid 2012,  that gives parents more help before benefits are suspended or cancelled.

As well, the government will expand the trial to a further 16 communities,  including schools in Alice Springs, Tennant Creek, and Katherine.

The Department of Education, Employment and Workplace Relations has released  the evaluation  to the Herald in response to a request.

The Greens senator  Rachel Siewert, who has opposed the penalty approach, had  also called for the report to be made public.

The evaluation shows the threat of stopped payments brought forward school  enrolments that mostly would have happened anyway – for example, from March to  February. But it had no impact on the bigger problem of children leaving school  part-way through the year. Only 40 per cent of the children who enrolled after a  notification letter was sent to their parents stayed enrolled for the full  year.

The program’s ”poor” performance in improving attendance was due in part to  the reluctance of school principals to dob in parents to Centrelink.

The report said it was ”not clear” how the program could address the  reasons for chronic absenteeism, which included cultural obligations, clan  conflict and violence, transport and health problems.  ”Tailored case  management” was the most critical factor in reducing absenteeism, it said.

Under the scheme’s second version, implemented in 2010, children’s attendance  records were  relayed to Centrelink, bypassing the principal. A departmental   evaluation of the early stages, based on samples as small as 56 children, shows  the change led to improved initial attendance for about 80 per cent of the  children whose parents were sent a letter threatening payment suspension,  ”although many of these improvements were slight”.

The Herald has learnt, however, that the improved attendance was not  sustained   due to Centrelink’s inability to provide the necessary support to  families.

The scheme’s proposed third version will allow the  territory government to  take the running with its new approach that requires principals to convene  formal ”attendance” conferences with persistent problem families, social  workers and others. ”Attendance plans” will be drawn up.

If improvement is not evident after 28 days, families  will be referred to  Centrelink for payment suspension, and other families can be fined.

The Minister for School Education, Peter Garrett, said payment suspension  would be used as a last resort when parents had rejected repeated attempts to  discuss the barriers to their child’s attendance and assistance to resolve  them.

In the far North West of South Australia, bordering both WA & the NT is 105,000 square kilometres of stunning arid lanscape. This is Anangu Pitjantjatjara Yankunytjatjara lands, home to 2500 people the vast majority being the Aboriginal peoples who have called this home for thousands of years. And now the local Australian Rules Football superstar is coming to the big smoke to challenge the best in the AFL.

With the 34th pick in the 2012 AFL Rookie Draft the Hawthorn Hawks selected Amos Frank. A two time Far North West Sports League best-and-fairest, the record holder in the SANFL for the 20m sprint and with skills giving him the ability to do anything on the field the drafting of Frank should come as no surprise. Yet today he is grabbing headlines as only the first man from the APY lands to have ever been listed with an Australian club. Like most Aboriginal peoples from his lands he speaks English as a second language and has only travelled to Melbourne three times. But the Hawks, SANFL and AFL are all confident they have the appropriate support networks in place to help him transition to a huge life change.

Frank will move to Melbourne with his partner and two young children and is proud to represent his home country and act as a role model for the young people of his community. He will follow in the footsteps of Warlpiri man Liam Jurrah, from Yuendumu who has successfully transitioned from remote central Australian to superstar AFL player and 2010 NT Young Australian of the Year.

“The community as a whole, they will all be in brown and gold as Hawthorn supporters now,” SANFL Aboriginal participation manager James Moore said. “They will follow Amos, everything he does in Melbourne, he will be followed. So, he’s become a leader and a role model for all the kids up there and he knows that. He’s got the pressure of performing well and I think he will do that as he is a very level-headed young man who represents the APY Lands very well.”

For many young men the promotion to the AFL is tough as they overcome home sickness, the pressure to perform well and the daily grind of playing with and battling the best.  For Amos Frank there is the extra pressure of a new language, fast paced city and the expectation that only a trailblazer for his people can understand. But mark my words, this is a superstar in the making. He has Ferrari like speed, the ability to kick beyond 50 with both feet, tackling ability to rival new team mate Cyril Rioli and a feeling for the game to do things we haven’t even dreamed.

This too is a test for the AFL and Hawthorn, while their efforts to assist Aboriginal players has come ahead hugely in the last 20 years there is always more work to be done and each and every individual must be given full support from the right people as well as cultural understanding to know how best to handle any issues that may arise. But as generations of Indigenous superstars have shown, their excellence on and off the field is a great uniting force both in football and in the broader community.

When Amos Frank has you out of your seat with highlight real action just remember, Indigenous Excellence is in every child in these lands.

Climate Change – Is there two sides to the story?

Bill Maher lays waste to Climate Change Deniers and questions the need for two sides to every story.

The Truth on #AsylumSeeker Numbers! 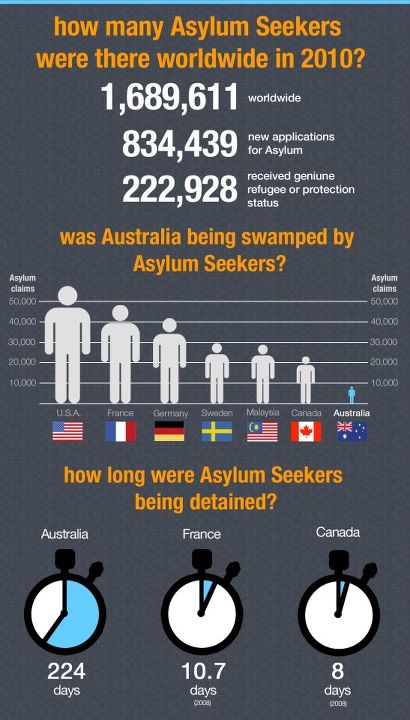