The 1971 South African Springbok Rugby tour of Australia was the most controversial of all Australian involvement in ending the reign of Apartheid in South Africa. The six week tour of an all white South African team was dogged by protests where ever the team traveled. After a protest by more than 5,000 the Test Match in Melbourne was cancelled, while games in Sydney were played behind 2m chain wire fences.

But it was in Queensland where the issue escalated and then Premier Joh Bjelke-Petersen issued a month long state of emergency. Joh was a supporter of the Apartheid regime in South Africa, but people took to the streets on mass to show their support for an end to Apartheid.

PETER BEATTIE, FORMER QUEENSLAND PREMIER: It was one of the reasons why I ended up in politics, so there you go. (Laughs) It really, sort of… Well, I’d always had an interest in politics. This really politicised my view that this was just wrong.

WAYNE GOSS, FORMER QUEENSLAND PREMIER: For us, racism was objectionable. And the Government taking a pro-apartheid position – which is what we felt they were doing – and on top of that, using the police deliberately, quite deliberately, to have a confrontation, I think, made us very angry.

Protesting in Queensland in the 1960’s & 70’s for civil and political rights here and abroad was always going to lead to a conflict with police. But that didn’t deter thousands of Queenslanders taking to the streets.

Mandela – Bring Him Back Home

The Movement to free Mandela and lift South Africa out of Apartheid, much like the Civil rights movement in the USA, had a great influence on Musician’s around the globe and inspired collaborations between Black and White. Not only was this music a show of solidarity, an echoing of the feelings of the repressed, but also a chance to show the beauty that is capable when Black and White come together.

Paul Simon worked with many South African artists to create his Album Graceland and performed Two concerts in Harare, Zimbabwe, in 1987, for a mixed crowd. Many of the audience were the exiled leadership group of the Anti-Apartheid movement.

Posted in For your information, Music

Everybody remembers – and, indeed, needs – an inspirational figure who has played a signal role in their lives.  Nelson Mandela has been that role model for countless people around the world.

Nelson Mandela has been a lawyer and a freedom fighter, a political prisoner, a peacemaker and president.  A healer of nations and a mentor to generations, Nelson Mandela – or Madiba as he is affectionately known by millions – is a living symbol of wisdom, courage and integrity.

As we celebrate his 93rd birthday and this second Nelson Mandela International Day, I join with the Nelson Mandela Foundation in encouraging people around the globe to perform 67 minutes of public service on Mandela Day – one minute for every year of Mandela’s own service to humanity.

Nelson Mandela himself once said: “We can change the world and make it a better place.  It is in your hands to make a difference.”  Let us embrace this message.  Tutor a child.  Feed the hungry.  Volunteer your time at a local hospital or community centre.  Make the world a better place.

Together, the best way we can thank Nelson Mandela for his work is by taking action for others and inspiring change.

1DeadlyNation.com joins the world on this day 18th July to celebrate to celebrate Mandela Day and in doing so commencing what we are calling Africa week were we will explore the connection Australia shares and the contribution Africa and it’s people have made to our nation. 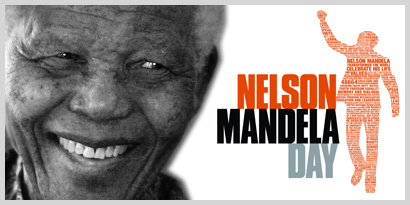 “Nelson Mandela has fought for social justice for 67 years. We’re asking you to start with 67 minutes.”

“We would be honoured if such a day can serve to bring together people around the world to fight poverty and promote peace and reconciliation,”

Following the brutality of the second World War, the violence, rape, genocide and destruction across the globe. International efforts were made to bring about a worldwide minimum for what all human beings were entitled to. The previous international charters and instruments had been too broad and not given much in the way of Individual protections.

In 1948 the UN General Assembly adopted The Universal Declaration of Human Rights, designed to enshrine forever more the basic rights all human beings are born with and cannot be taken away. While not designed to be a legal document the UDHR makes up part of what is known as customary International law. But more than six decades have passed and very few countries today live up to the promises of the declaration, many people do not know their rights and for the most part the abuse of these rights goes unpunished.

We must recommence an International dialogue on what these minimum standards are and how we must uphold them. Past generations went through great hardship and then great courage to draft these documents, we must honour the past, the present and the future by learning them, implementing them and enforcing them for the betterment and benefit of all.

Posted in Get involved!